The USS Hornet is a storied shop docked in Alameda. It is now a museum and national historic landmark.

In the bathroom this morning, I started thinking about hoarding and impulse buying of toilet paper.

Before the COVID-19 pandemic, toilet paper was plentiful and bountiful. Full stacked aisles were available at Costco, Target, and even at the neighborhood corner store.

No one worried about where they would get their next roll.

Toilet paper went from something you didn’t think about to a the Great Toilet Paper Panic of 2020. 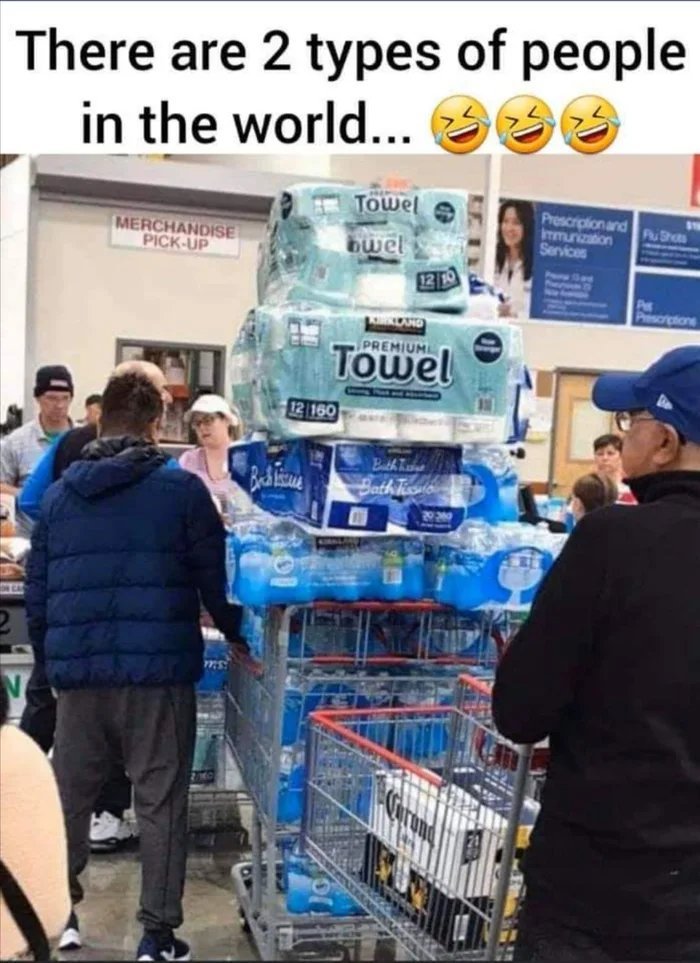 1/ Toilet paper was never that scarce.

The shortage came from panic buying, not from reduced production or supply. People got anxious and felt like they needed to get as much as they could while the getting was good.

The problem with this mentality is that it became a self-fulfilling prophecy. It wasn’t scare until the people who were worried about it being scarce, made it scarce.

You imagined scarcity and got scarcity. Surprised? You people suck.

2/ Stores began rationing how much toilet paper a customer could buy.

Because customers didn’t have self-control and general consideration for others, stores needed to step in and regulate how much toilet paper customers could buy. 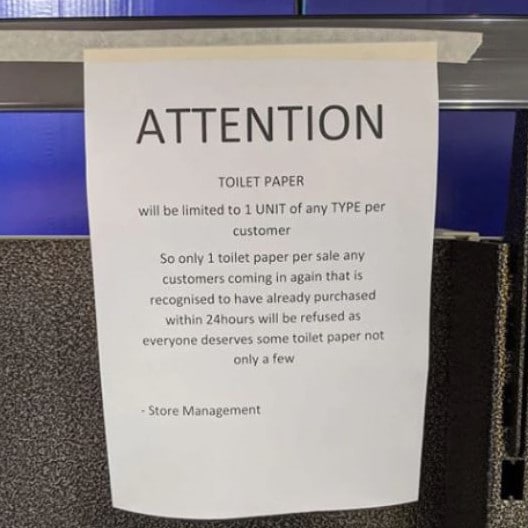 Buy what you need, but leave enough for others to get their share as well.

Stores are saying: “You have enough—leave some for your fellow shoppers.”

It turns out limiting how much toilet paper any one household could accumulate is a good thing.

I was heartened to see in my social media feeds and texts, messages from friends and neighbors willing to share their stashes toilet paper.

I saw instances of friends telling others which stores had it in stock and even offering to buy some and drop off.

Are you with me so far? It seems almost laughable that toilet paper would be thought of in these ways and receive so much attention.

But I want to draw your attention to a thought exercise that stirred in my brain this morning.

Take out the word “toilet paper” and swap it with “money” instead. Reread what I wrote with that in mind and be prepared to discuss.

Your homework assignment is due tomorrow. 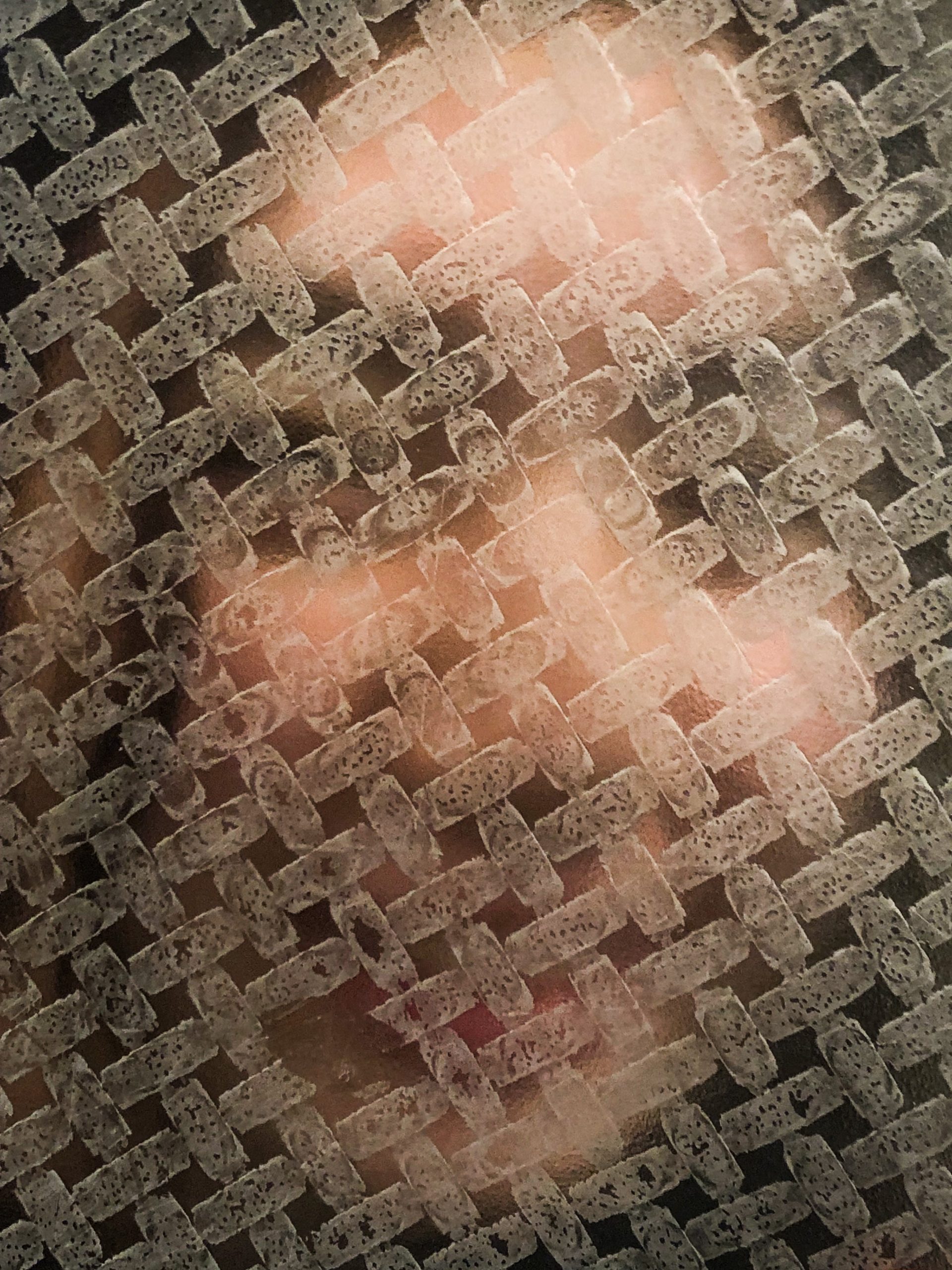 I’ve decided to diversify our income by becoming a tech reviewer.

Here’s my first unboxing video. Hope you like it!

No, not that Celebrity game.  We just played this shelter-in-place style over Zoom and it was loads of fun.

Celebrities is a party game introduced to me by friends, Jean Cheng and Eric Chou. It’s super fun and we realized with a little effort, it can be adapted to be played over Zoom. These instructions are written by Jean, with an assist by me (Eugene).

Celebrities is a guessing game where players secretly submit a celebrity name. After hearing the full list of names, players take turns guessing who submitted which name until all celebrity names are revealed.

What do you need?

Think of a famous name that other people in the room would know. It can be real or fictitious, person, animal, cartoon character…anything goes, as long as it’s a recognizable name.

When you’ve got your name, submit it via the Google Form to the host and then, in the participants tab, “raise your hand” to signal you’re done.

Once everyone has submitted, the host will read all of the celebrity names out loud exactly TWICE, without revealing who submitted which famous name. Players should listen carefully but are not allowed to write anything down. This is the only time players will hear the list of celebrities.

Starting with the person whose name is at the top of the participants tab, have them guess who submitted a celebrity name.

Let’s say it’s Angela’s turn, and she says, “Eugene, are you the person who put in Mr. T?”

If Angela guesses wrong, her turn is over. If she guesses correctly, Eugene joins Angela to form a team. Each player gets one guess per turn.

Because he was identified, Eugene is no longer an active guesser in the game and doesn’t get a turn. Eugene is now part of Team Angela.

He should “lower his hand” in the Zoom participants list to show he is now on another player’s team. That signals to the host that Eugene doesn’t take a turn to guess.

Play resumes. The next person on the participant gets to guess.

If the next turn falls to someone who has a team, they can text or message among themselves who the team guess is.

The teams are a key advantage to this game. Teams caucus to share information and collectively strategize on the next guess.

Every time a player is guessed correctly, they are added to the guesser’s team. If they have a team, all of their players move to the new team forming an even larger one.

Pretty soon teams multiply in number and in size. The teams grow larger in membership as they consolidate through correct guesses.

Eventually, it’s down to two teams with half of the players on each.

Whoever is the last person/team standing wins!

It’s such a slog to get groceries these days that we’ve taken to texting our neighbors before we go: “Hey, heading to the Bowl. Need anything?”

The pings and pongs of text messages land in our talking minicomputers:
“Oh yeah, some broccoli!”,
“Can you get us some sugar?”
“We’re all set, but thank you for asking!”

And they’ve been doing the same for us.

After one of our trips, the neighbor across the street gave us a bush frond of fennel. She’s a gardener. 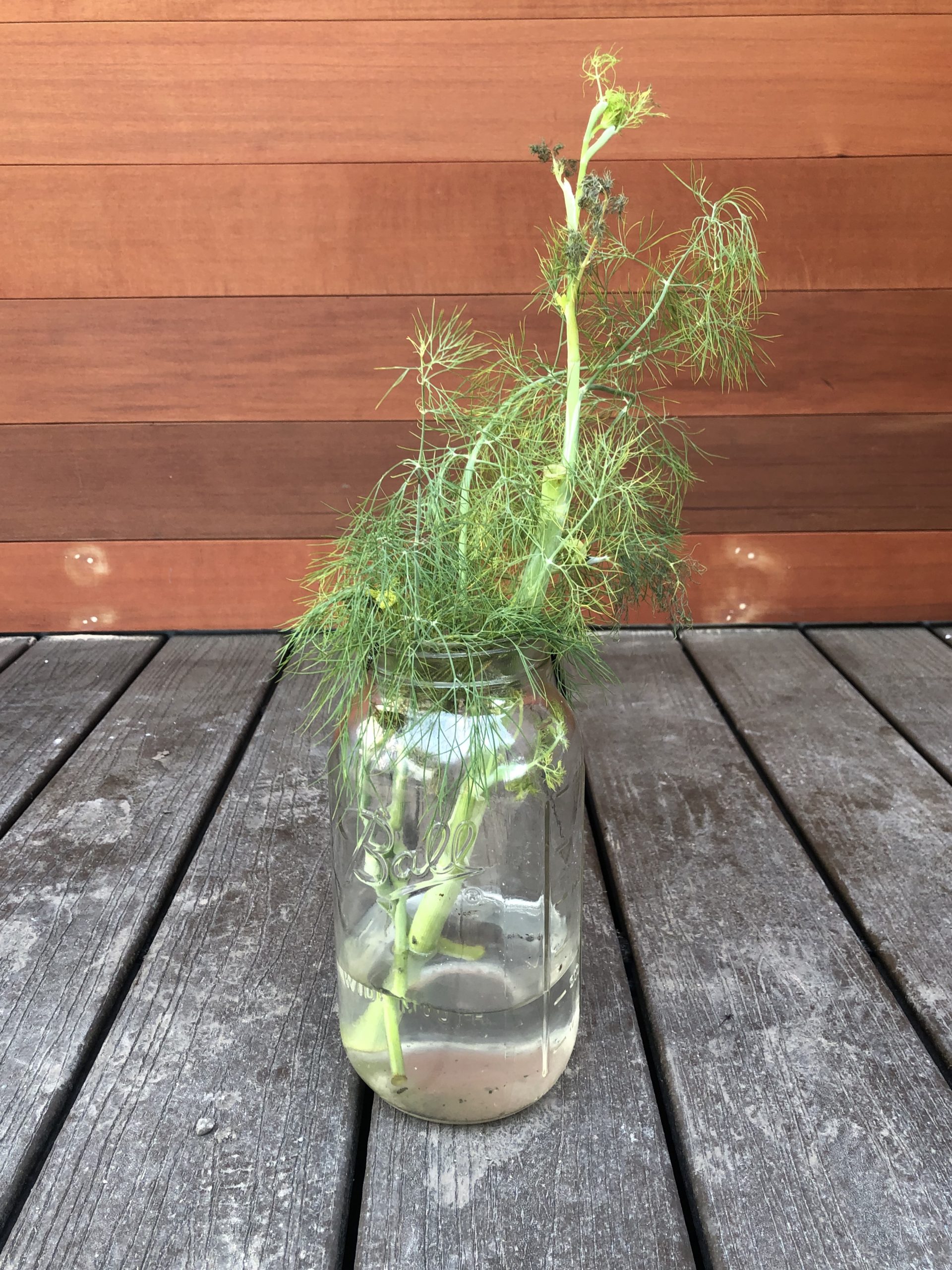 We put the fennel in some water and stuck it on our counter.

A few days later, while she was washing dishes, V said, “Hey, I think there’s a caterpillar in the fennel!”

Lo and behold, meet the newest member of our family—Marty! 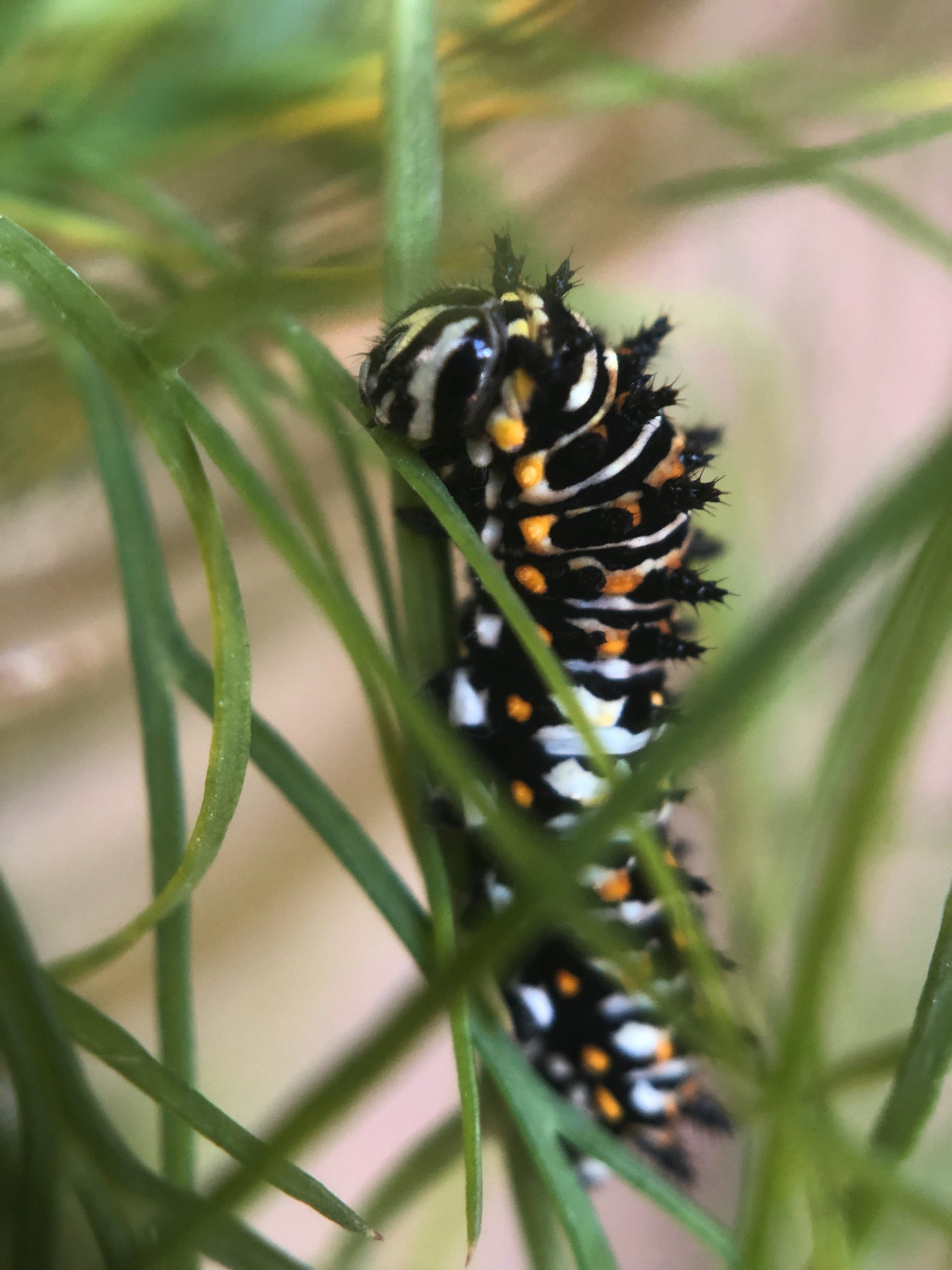 Marty is a prodigious eater and shitter.

Their poops are little, but everywhere.

Because, like the fennel that carried the almost invisible swallowtail egg that turned into Marty, these days, look for the little things that will lead you to something wonderful and beautiful.

My son walked by the living room as we were watching JoJo Rabbit and asked, “What’s this? A Nazi boy scout movie?”

In many respects, that’s exactly what JoJo Rabbit is.

It’s a movie about, JoJo, a ten-year old boy who is a fervent Nazi and even has an imaginary Adolf Hitler as his best friend. He wears a uniform and goes out with his friends in a youth camp for aspiring Nazis.

Much mirth and hijinks ensue as they burn books and draw horrible pictures of their enemies.

This is, after all, a movie about the Third Reich. And even though you know how the grand story ends, there are moments in the film where you don’t know exactly when the actions of the villains will cross the line from caricature and buffoonery to cruelty and evil.

I would rate it as a good, but not great, movie that deftly balances humor with pain and dread. Taika Waititi, the director and writer, calls JoJo Rabbit an anti-hate satire.

Recommended, but not a must watch.

It turns out that Lulu Wang’s real life grandmother—the one portrayed in the movie “The Farewell”—learned about her “terminal” cancer diagnosis from reviews of the film.

Interviewer: And she still doesn’t know?

Lulu Wang: Oh, gosh. This is a complicated question. She actually just found out. And it’s very traumatic that it’s coming out in China. And the title of the movie is Don’t Tell Her in Chinese. And her friend saw a review of it and was so proud of her, one of her longest friends, and sent it to her. And the review said, “The film is based on Lulu Wong’s real life. Her grandmother was diagnosed with Stage IV cancer in 2013. Her family threw a fake wedding for her cousin from Japan and her grandmother didn’t know. Then she made a movie about it…” so it went through the entire history of our family, and my grandma read it. And so she said to little Nai Nai, her sister, who plays herself in the movie, she said, “I just thought that you were really daft, because you went and shot a movie, you went to the premiere in New York, and you come back and you can’t tell me anything about it. You can’t tell me what it’s about. You can’t tell me the title. But look, it says in the newspaper it’s called Don’t Tell Her, and that’s why you didn’t tell me, because I am the “her” of the “don’t tell her.”

But we haven’t talked about it, so I’ll see what happens when I see her.

The Farewell opens with the words “Based on an Actual Lie.”

It is a gorgeous movie, written and directed by Lulu Wang and features Awkafina in a dramatic starring role as “Billi”, the granddaughter who comes home to Changchun to see her Nai Nai (Grandmother) for the last time.

The lie is the tent pole for the film because Nai Nai has been diagnosed with terminal cancer, but the family has decided not to tell her. Instead, a rushed wedding is arranged as the pretext for everyone to gather and pay respects to Nai Nai.

The film’s emotional resonance lies in the truth and the feelings that aren’t being verbalized. The characters often say one thing with their words and another with their eyes or faces. Wang uses directness and indirectness as a literal metaphor, often framing shots with characters looking or talking off-screen to another character that is not visible.

An aspect of the film that I identified with was the feeling and experience of traveling back to China from the States. Billi finds her way to her Nai Nai’s apartment in Changchun where all the relatives are gathered. She is heartily greeted by all the family as dinner is being prepared. Similar to me, Billi is not 100 percent fluent in Chinese and there are feelings of awkwardness when she communicates in front of her relatives.

The Farewell revolves around the love between a grandparent and the grandchild that is coming home.

Billi and Nai Nai are more than just “grands” to each other—they are bffs. They talk on the phone every day.

Nai Nai and Billi’s relationship is special and strong.

Not being able to tell her grandmother the truth is the heartbreak. Billi is caught between her desire to tell her Nai Nai the truth, and the rest of the family’s feelings that they are doing the best thing by NOT telling Nai Nai.

The relationship between grandchild and grandparent is the heartstring in tension and constantly tugged here.

And that is what makes this film worth seeing.